In the final post from CASL alum Maria Corso, she explains why she opted for an all-female crew for her short film, and how the classes she took at CASL effected her career as a filmmaker and director...
In my opinion, the most important part of being a filmmaker is a deep understanding and knowledge of film history (including the history that’s being created as we speak). I truly believe that through the courses I took in CASL at UM Dearborn, I was able to increase my base knowledge of film into an entirely new and expanded perspective, one that has instilled in me a desire to continue learning well past graduation and has informed all choices I’ve made in my career.

In a history of documentary class, I had my first real direct-something-and-show-it-to-my-peers moment. Our final project was a to make our own documentary. I remember the Professor coming up to me after class and complimenting me on the interesting perspective I had chose to shoot it, which was incredibly encouraging. This class also opened me up to documentary as a medium, something that initially didn’t interest me, but I eventually came to love and realize how it completely influenced narrative filmmaking. I also recall that it was through this class, a group of us were offered the opportunity to visit a television 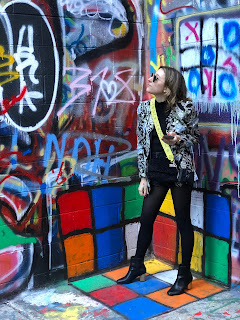 shoot that was happening on campus. The now cancelled series, “Detroit 187,” was shooting a few scenes in one of the buildings and we were given a tour of the set. We got to chat with crew members, getting a sense of what everyone’s job was and were also able to watch a few scenes get shot. This was one of the first sets I had ever been on and it was a really thrilling thing to be a part of.

World cinema is also something incredibly dear to me and the introduction to it was the German cinema classes I took. One was a history of expressionism and the other was specifically about women in Germany. Its important to not only get a perspective of what was going on in cinema in certain times in our world history, but also how countries influence and are inspired (and directly copy) each other. My professor was so incredibly passionate and knew exactly which films to choose, and her enthusiasm made me enthusiastic. I still love watching German films and think about that class.

On my short film, it was a non negotiable for me to have an all female crew. There is a terrible disparity in the 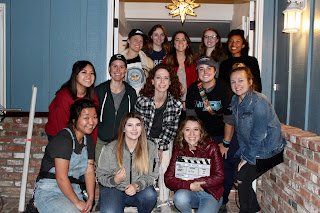 industry and I would not be part of the problem. I also chose to tell a story with a female protagonist. I credit this to a class I took at UM on film and feminism. Seeing how many films (even those about women) came from male perspectives and how many of those films have unfavorable or sexist views, was eye opening. We are so used to it, we don’t even realize it. This class inspired me to change that and was a huge influence on my directing decisions both pre and post production. A lot of the classes revolving around script writing have been incredibly helpful to me. Not just the script writing workshop class (in which we wrote one feature film script over the course of a semester), but in the journalism and writing for electronic media classes offered. Its important to know how to write short form and long form, not just for film and tv, but for print as well. Both of these classes also involved having our work read aloud and critiqued, which I found incredibly helpful. It may sound good on paper or in your head, but listening to it in another voice is essential for getting the true feel for what you’ve written and more importantly, how its interpreted.

While these classes were more geared towards my field, a lot of the CASL classes I took may not have been directly about film, but helped to make me a better filmmaker and storyteller. For example, I took multiple English classes, ranging from the fairy tale to American contemporary, to British literature, to dramatic plays, to the writings of women in the Renaissance. The most essential part of filmmaking is story. Without a solid story, you cannot make a good film. These classes helped me to understand story structure. They also helped me to gain more insight into different perspectives from around the world. Hearing voices other then your own, opens your viewpoints and gives you an insatiable curiosity. Reading helps make you a better storyteller. One of the most interesting classes I ever took in the CASL program was a class about the psychology of theater. It ranged from discussing why actors make the choices they make to what goes through our heads as an audience when we watch or hear something. We also looked at the psychological concepts present in a lot of plays. It was fascinating and it has not only helped me in how I approach and interpret material, but also how I directed my actors on the set of my film. Art was a subject that I didn’t know I had a very real interest in until taking Modern Architecture and Western art at UM Dearborn. I was so passionate about it, in retrospect it should have been another minor for me. Regardless, these classes taught me about colors, shapes, and composition-all essential filmmaking concepts. While paintings, sculptures and buildings aren’t the same as digital images, they all apply the same basic principles of creation. I often go to art museums when I’m feeling uninspired. Physical art really feels like the closest tangible thing to the visual medium of cinema.
Email ThisBlogThis!Share to TwitterShare to FacebookShare to Pinterest
Older Post Home