Meet Maria Corso, a 2012 CASL alum who LOVES to direct films. How did she get her start? What were some of her challenges? Find out in part 1 of her blog post...

I have always had an affinity for California. My grandparents had a home there and I visited multiple times throughout my high school and early college years. However, it didn’t really hit me that California was the place I wanted to live until deciding that working in the film industry was the career path I wanted to pursue. In the years I was at the University of Michigan Dearborn (2008-2012), the state was experiencing a surge in film productions due to a generous tax incentive. That incentive was unfortunately very short lived and upon graduation, I realized there would be no chance of me finding steady work in my home state.

I graduated in the spring of 2012 and by October of the same year, I had moved out to California I 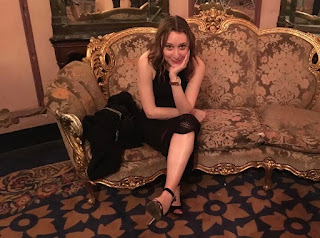 had the great fortune of being able to stay with my grandparents in their home, rent free for my first year. However, their home was almost two hours away from Los Angeles. For that first year, I commuted to the Los Angeles area a few days a week. I did not go with any job prospects, merely some savings I had accrued from working part time jobs throughout college. I had two unpaid opportunities lined up. The first was a week of volunteering with the AFI Film Festival, literally a few days after I had moved. The second was an internship with Cross Creek Pictures, a production company that has produced films like Black Swan, Everest, and most recently, American Made. There I was a script reader and also did some receptionist duties.

I eventually moved on to many other positions and companies (and moved to Los Angeles itself), some great some not so great. The industry is incredibly hard to break into when you don’t know someone already in the business. I’ve found that through taking on some of these smaller positions, they have led to bigger and better ones and helped me gain insight and experience along the way. For example, volunteering with AFI helped me to be hired for a screener position with them a year later. They also helped me narrow down exactly what I wanted to do in the industry. When working at Cross Creek I realized that producing (what I initially wanted to do when moving to Los Angeles) was not something that interested me at all. I wanted to be involved in film in a more creative way and a less business oriented way.
Email ThisBlogThis!Share to TwitterShare to FacebookShare to Pinterest
Newer Post Older Post Home